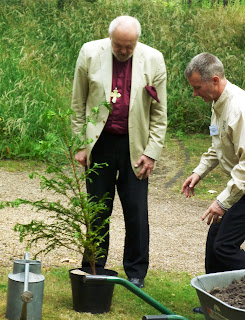 I was recently at Lambeth Palace for a day meeting with other green fanatics and agencies. These included Russell Ball from ‘The Ancient Yew Group‘. Apparently, Veteran Yews are 350-1000 years old, and Ancient Yews are 1000-5000 years old, which by any standards is staggeringly old. Yew trees have had a troubled life in the last few hundred years, being cut down to make long bows so we can kill each other. And the few that are left in this country are generally in churchyards. Now Russell is very keen that we don’t kill off any more of the Yew trees and suggested that if we have any in our churchyards that we get a Tree Preservation Order for them. This not only protects them for the next generation, but also enables people to obtain free expert advice if there are any issues with the tree.

Those of us who attended the day wandered through Archbishop Rowan William’s garden and planted a baby Yew tree. I hope he doesn’t mind.

Want to join the discussion?
Feel free to contribute!

Biodiversity and Shrinking the Footprint