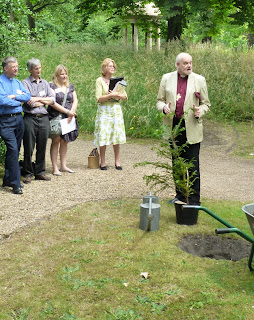 A couple of weeks ago I attended Lambeth Palace for the annual ‘Shrinking the Footprint’ day (The Church of England’s Environmental Campaign). They have a new website which I would recommend visiting. This year we are particularly looking at the subject of biodiversity. Estimates vary, but it is thought that currently we are losing species at a rate between 100 and 10000 times faster than that which was typical in the geological records. This affects humans in terms of air quality and water pollution, and may make it harder for nature to survive changes in the natural habitats. A helpful website on biodiversity is here.

The Bishop of London, Richard Chartres, introduced the day and said that we have a spiritual and moral basis for action, and that he suggested four areas in which to take action:

He then described two symbolic actions that they have carried out in London, one where they fed 5000 people on waste from supermarkets, and the other was an ecumenical procession through Windsor Castle. The latter was described here on Oprah’s Blog:

Windsor Castle, the bucolic weekend retreat of Britain’s Queen Elizabeth II and her pack of corgis, has witnessed the plague, beheadings, and centuries of state dinners, but it’s surely never seen this: a procession of bearded Sikhs in orange turbans, bald Buddhist monks in habits, Jews in top hats and prayer shawls, Japanese Shintos in white jôes—even a Greek Orthodox archbishop in a black kamilafki hat and floor-length cassock.

I hope and pray that all these things give us hope for the future and an opportunity to care for our planet together.

Want to join the discussion?
Feel free to contribute!

Get ready for Inspired by Creation